Arizona, suffering through one of the worst real estate markets in memory, is considering HB2584, legislation that would give homeowners considering short sales the same legal protection provided to those facing foreclosure. According to Bob Hertzog, owner of Summit Home Consultants (who specializes in helping homeowners through the Phoenix short sale process), HB2584 would guarantee that homeowners would no longer be forced to negotiate with lenders to absolve them of financial responsibility for any shortfall between the amount paid for a short sale property and the amount owed on the mortgage at the time the short sale transaction is competed.

Bob Hertzog, of Summit Home Consultants, Inc., a Phoenix residential real estate brokerage that specializes in short sales, points out that in 2011, over 23,000 short sales were completed in the Metro-Phoenix market. â€œThis legislation is hugely important for the average homeowner contemplating a short sale,â€ Hertzog said. â€œWhen homeowners are looking at a short sale as a possible solution, they have a few things to consider. One of those factors is the issue of deficiency balances. If homeowners will be on the hook for deficiencies after a short sale, theyâ€™re better off just letting the property go through the foreclosure process, as they are guaranteed full deficiency protection under the current statutes, which have been in place since 1971.â€

Hertzog said almost two-thirds of Arizona homeowners are currently underwater on their mortgages, which means that HB2584 has the potential to help thousands of Arizonans, although the majority of those who would benefit from the legislation are those facing foreclosure, currently going through severe financial crises, or have lost their jobs.

Some elected officials, including Senator Jack Harper (R-Surprise) are promoting competing legislation that would eliminate deficiency protections altogether for homeowners facing foreclosure. Hertzog said he believes that legislators are battling for the heart and soul of Arizonaâ€™s real estate market.

â€œLegislators are torn between coming down on the side of homeowners or lenders. Senator Harper has decided that lenders need protection from homeowners dealing with falling home values, sky high unemployment and tight credit,â€ Hertzog said.

â€œLegislators are going to have to decide whether lenders deserve more protection, or whether itâ€™s high time that Arizonans who try to do the right thing by selling homes they cannot afford with short sales deserve the same protections they would have if they just let the foreclosure process play out. Thatâ€™s what this is all about.â€

No vote is currently scheduled on HB2584.

View all posts by: webmaster

What is the Calculator 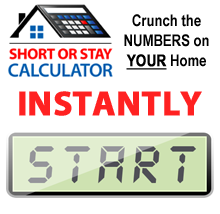